African roots in Latin American and Caribbean food in 11 dishes

It is estimated that more than 11 million African people were taken from their original territories to be enslaved in what we now call Latin America and the Caribbean region. This human movement comes from colonial times to almost the construction of the Latin American nation-states. Thus, the African diaspora has had an impact not only on social, racial, economic, and cultural diversity but also on culinary diversity.

Many of our national dishes have ingredients and techniques of African origin that were reinvented and adapted over the years in the kitchens of our lands. Yam, pigeon peas, Candia, guinea fowl, sweet pepper, coconut milk, yucca, banana, black beans, and long rice are just a few. Combined with food from the new lands, these meals were part of the community identity in places where enslaved communities settled and, later, already in their struggle for freedom and independence, in palenques and quilombos.

As Latin Americans in the diaspora in the United Kingdom, we have found some products and food in multicultural London markets. Many of these products are familiar to us, and others are completely new. The truth is that food transports us to our territories and their flavors. That culinary heritage that lasts today is a demonstration of resistance, collective memory, and celebration. Here we present to you 11 dishes of African origin that are still being cooked in Latin America and the Caribbean. 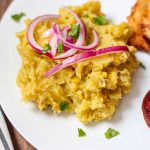 Mangú (Mashed Plantains) is very popular in the Dominican Republic and comes from the Congo region, from a similar dish that was eaten during slavery times, made with boiled banana. The real name of the dish is mangusi. The word mangú comes from the West African word mangusi, which refers to any pureed vegetable from the land. The origin of mangú dates back to 1916, when the Americans invaded the Dominican Republic and, after, soldiers would go to the city. One day, one of the soldiers wanted to taste some of the mashed banana he had seen the locals eat. When he tasted it, he said “Man this is good” and pointing to it, he said shortly “Man, good!”. The residents then thought that the name of the plantain puree in English was mangú. 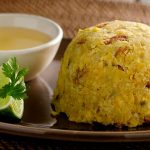 Mofongo is a dish made by mashing fried green bananas with garlic, olive oil, and chicharron (fried pork skin). The mixture is molded into a bowl and assembled before being stuffed or served with any meats or vegetables and a garlic sauce. According to historian and author Cruz Miguel Ortiz Cuadra, mofongo comes from the Angolan technique of kneading large amounts of starchy foods, then adding liquid and fat to soften the mixture. Slaves from Angola and other parts of Africa were brought to Puerto Rico in 1500. The word “mofongo” derives from the Angolan Kikongo term “mfwenge-mfwenge”, which means “a large amount of anything”. Going even further, the dish has its roots in West African fufu, a boiled yam puree. Today you’ll find many versions of the iconic mofongo in Puerto Rican, Dominican and Cuban restaurants. 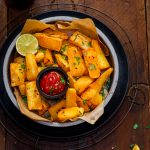 Mogo mogo is made from cassava, also called Aipim, Mandioca, Balinghoy, Mogo, Kamoteng Kahoy, a woody shrub of the Euphorbiaceae family well known in Mexico, Peru, Colombia, Ecuador, Cuba, and the Caribbean, in addition to Brazil. This dish is like making chips, but replacing potatoes with cassava, to accompany any dish with meat and vegetables. 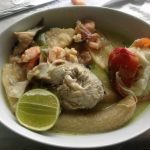 Rondón is an Afro-Caribbean dish eaten in several Latin American countries that share the coast with the Caribbean Sea. It is a soup made up of different types of seafood (fish, crabs, small lobsters, or shellfish), with coconut milk, bananas, vegetables, peppers, and spices. It is a traditional dish in the Antilles, Colombia, Panama, Costa Rica, Nicaragua, and Venezuela. 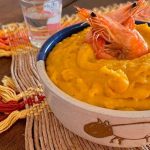 Vatapá is an Afro-Brazilian dish made from bread, shrimp, coconut milk, finely ground peanuts, and palm (dendê) oil, kneaded into a creamy paste. It is a typical food from Salvador, Bahia, and is common in the North and Northeast regions of Brazil. In northeastern Bahia, it is usually consumed with acarajé, and is also used as a ritual offering in Candomblé, with acaçá or acarajé. Vatapá is usually consumed with white rice in other regions of Brazil. From an African origin, the vatapá arrived in Brazil through the Yoruba people under the name of ehba-tapa. 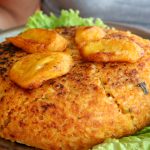 Tacu tacu is known in Peru. Across Latin America, rice and beans are a staple food rooted in slavery – and each country has its own version. It was black slaves who cooked the bean stews. In Peru, Afro-descendant women fried leftover rice and canary beans with lard to make tacu tacu, a dish whose name comes from the Quechua word taku, which means “mixed”. 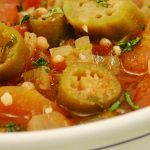 Okro soup is a typical dish from the Garifuna region in Trujillo, Honduras. It is a root soup, where the main ingredient is the African vegetable okro (neju in garífuna, okra in English). Okro soup is also medicinal, being eaten to eliminate kidney stones, for example. During slavery in the Americas, slave masters gave them the inferior parts of the animals they owned. From these, the slaves and later the Garífuna community managed to make recipes such as chicken foot soup, pig’s foot, pig’s head, pig’s tongue, fried giblets, chicharrones, and chihara. 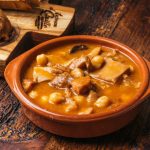 Spicy Tacneña was born on cotton and sugar cane farms in the Sama Valley, in Peru, where black slaves of African origin lived. They used the leftover meat for food and combined them with some products from the region, such as pepper, potatoes, charqui, and cochayuyo, according to journalist and historian José Gilio Vargas, from Tacna. The spicy dish of tacneño was initially prepared with leftovers of guanaco or alpaca llama, animals that transported minerals from the silver mines of Bolivia from Potosí to Peru in the 1530s. cattle, with which they prepared their delicious barbecue, and the entrails were seasoned with those of guanaco or llama. 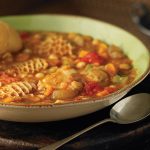 Mondongo is eaten in various regions throughout Latin America. It is made by cooking a soup whose main ingredient is ox tripe. Seasoned with pepper, onion, garlic, tomato and aromatic herbs, this soup is easy to find in any popular market in Colombia, Cuba, and throughout the Caribbean, as well as in some regions of Brazil. Ethnolinguist Yeda Pessoa de Castro, from the University of Bahia, proposes an etymology for mondongo in the African Kikongo language, meaning “intestines, entrails of certain animals”. 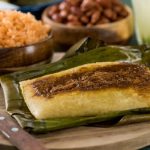 Tamales uses one of the African cooking techniques widespread in Latin America and the Caribbean, which is the use of the green leaves of banana trees to seal dishes that require concentration of flavor, moisture, and consistency, being cooked slowly. In the Coast and Caribbean region of Mexico, where Afro-descendants have settled to work in the sugarcane fields, the banana leaves are used to make the tamales, this typical dish where corn flour is mixed with lard, meat, and spicy stew, sealing them in the shape of a square for cooking. 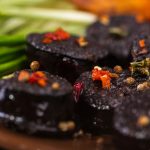 Chicken blood is used in many dishes. In Peru, historians claim that farmers enjoyed the best cuts of meat and reserved the lowest quality cuts and the leftovers of animals for African slaves. From this tradition, we obtain recipes such as chicken blood, a typical Peruvian dish that combines chicken blood with onions, peppers, cassava, or potatoes.

October is Black History Month in the UK. In this context, LAWA reflects on the impact of slavery in Latin America and the Caribbean, on the resistance of people who were enslaved in the imperialist colonial process, and recognises the invaluable presence of black communities in our territories. So, throughout this month, we’re sharing some facts about the roots, memory, and resilience of Afro-Latin American communities. We invite you to join the conversation beyond borders for the fight against discrimination, racism, and oblivion, following the struggle of black people and celebrating them.